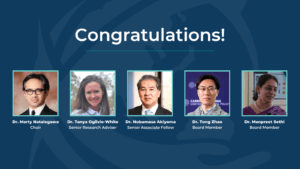 We are pleased to announce that Japanese Prime Minister Kishida Fumio has selected several APLN members and staff to serve as members of Japan’s International Group of Eminent Persons for a World Without Nuclear Weapons. The decision by Prime Minister Kishida was made official on Friday 2 December. Board Chair Marty Natalegawa, Senior Research Adviser Tanya Ogilvie-White, Board Member Tong Zhao, and members Manpreet Sethi and Akiyama Nobumasa will all participate in this distinguished panel of experts.

From Japan’s Ministry of Foreign Affairs:

Prime Minister KISHIDA Fumio announced the establishment of the IGEP as a forum in which participants from both nuclear and non-nuclear-weapon States will, aided by the involvement of incumbent and former political leaders around the globe, exchange ideas and thoughts beyond their respective national positions and engage in candid discussions concerning a concrete path towards the realization of a world without nuclear weapons.

The 15 members held their first meeting in Hiroshima on 10-11 December 2022. Prime Minister Kishida was in attendance to deliver remarks at the closing ceremony. Former United States President Barack Obama delivered a video message.

The chosen members of the international group include: